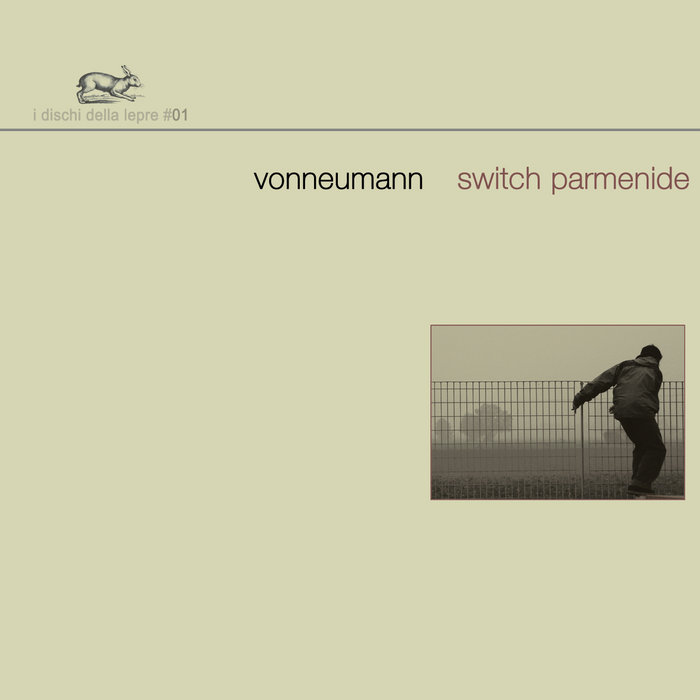 the idea of the album comes through a series of events, the origin of which can be easily pointed out: lorenzo brutti's flattering proposal to open up his "hare recordings" series. we immediately accepted, perfectly knowing that in the meanwhile we had taken on board a real problem: what to do?

to be honest, vonneumann had just previously recorded a more or less 10 minutes long improvisation which it was particularly fond of. the strongest feeling that this sort of unintentional suite bestowed was a sense of chase between the guitars and the drum set. it seemed obvious to our minds that this could have been the starting point of our CD for mr. brutti.

pondering on concepts such as: hares, suites, summer and chasing, vonneumann develop its idea based, as often happens, on misinterpretation and on lack of information, and here it is. almost everyone knows the story from aesop, the one of the turtle and the hare. sum it up with the fact that almost everyone thinks that they remember one of zeno's paradoxes, the one of achilles and the turtle: adding up the two things you get a great confusion. not to mention that many people also mix into all of this mess another one of the paradoxes: the one of the segment.

actually, if you think about it, this situation is quite fascinating since it reveals what parmenide said about human beings: that they mix that that is with that that is not, so they speak of things which one cannot speak about.

anyhow, someone instantly recalls that, as a matter of fact, zeno's paradoxes, the famous ones on movement, are four. from there on it is stated that vonneumann would do a track for each of the paradoxes, meaning: four tracks on the CD.

later on, vonneumann sums up the whole lot, merging the concept of movement inborn in zeno's paradoxes with the movement of a useless wooden toy supplied with four wheels, often called by youngsters: skateboard. indeed, one should point out the following things:

__ that making a full length album on zeno's paradoxes is somewhat old school (a revival?);

__ that all the paradoxes deal with movement;

__ that zeno came up with these paradoxes to illustrate and defend parmenide's main thesis, which can be summarized in: any change is impossible;

__ that two of us (fr and bof) are living through their own personal revival with a fierce comeback on skateboarding;

__ that skateboarding is, by itself, movement;

__ that skateboarding is a practice that involves having a wooden board do an infinite number of evolutions, but getting it more or less always back in the same position (no change);

__ that a widespread practice, in the new school of skateboarding, is to go switch, which means doing all the tricks that one does regularly (normal stance) inverting the position of the feet, in other words: in an innatural position (switch stance);

__ that to say "switch parmenide" is a contradiction in terms; in truth the switch stance is a change (however, if you master the switch stance, then it becomes almost impossible to distinguish the difference, more or less like a person who trains himself to become ambidextrous), but parmenide's doesn't admit the existence of any change nor movement because: that that is, is and that that is not, is not, so: either the switch stance is not, or it is not a change. whichever one of these options one chooses, speaking of it is a mixture of what is and what is not (thus, it brings to the way of seeming, which is illusory) and a juxtaposition of the terms "switch" and "parmenide" is an obvious absurdity.


moreover, it's amusing, if not even somewhat disrespectful, to associate greek philosophy with a street sport, which is often related to vandalism and killing grannies.

but then, how come the CD has 5 tracks? oh, well, this is an exceptional question! let's say that most of us still have inquiries on that matter. first of all, it was funny to come up with a personal paradox: the vonneumann paradox. then, it must be said, it is definitely nice to have a fifth paradox to play around with: it's an unexpected event and it summarizes at its best the switch parmenide concept: it is a paradox to believe in zeno's 4 paradoxes, being those mere falsities. in the same manner parmenide's thesis is paradoxical, so, in a game of switching around all this absurd arrangement, it becomes a surreal paradox, but so close, to ride in normal stance.


and there's your fifth paradox.

just an old fashioned free-rock band with tons of electronics to cheer you up!

Bandcamp Daily  your guide to the world of Bandcamp